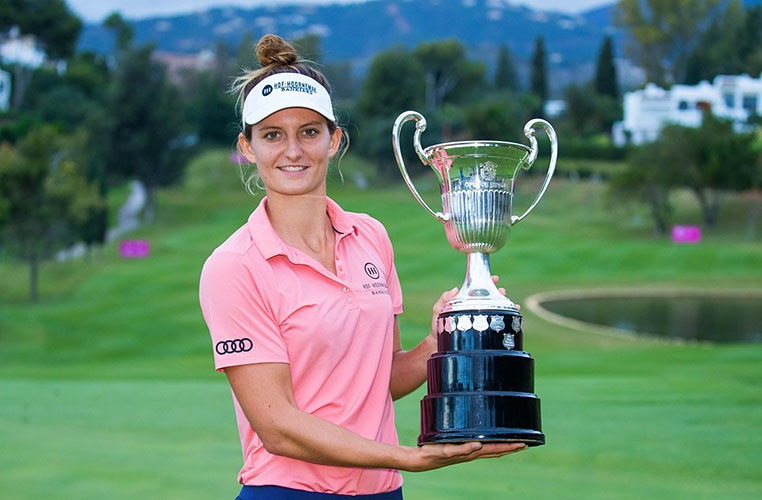 The Dutch golfer was trailing Nanna Koerstz Madsen going down the 18th, but Madsen put her drive into the lake and then three-putted for a double bogey.

Van Dam then made par to secure who second successive title at the Aloha course in Marbella and take home the winners cheque for €45,000.

She said, “I did not expect that. That’s golf. It was a crazy day.

“Nanna is a good friend of mine and I would have loved to have beaten her in a play-off – that would have been a better feeling for me, but that’s golf.

“She took more of a risk hitting a driver off the tee and I’ve been hitting an iron off the tee there all week.”

Madsen was obviously disappointed to have thrown it away at the last hole. The Danish player said, “I lost today; Anne didn’t really win. I played terrible and had three double-bogeys which cost me everything. On one hole, I had a wrong distance, then I pulled one and then on the last one, I played aggressively and had said that I would play driver, no matter what.”

Van Dam shot a two under par final round of 70 for a total of 275 or 13 under par. Madsen finished in joint second place with India’s Aditi Ashok on 12 under. Local Malaga-born Azahara Muñoz who won the title in 2016 and 2017 finished fourth.

The win was Anne Van Dam’s second tournament success in the 2019 season and her fifth on the European Ladies Tour.

The Netherland’s golfer has enjoyed some great success playing in Spain with wins at the Estrella Damm Mediterranean Ladies Open and Andalucía Costa del Sol Open de España in 2018.

The Andalucia Costa del Sol Open form part of the new ‘Race to the Costa del Sol’ format in 2020 and has committed to doubling the prize money for next year’s tournament.

At Golf Breaks In Spain, we specialise in golfing holidays in the Costa del Sol. If you would like to play the fantastic Aloha course yourself, check out some of our latest golf packages in Spain or our discounted Aloha golf green fees.